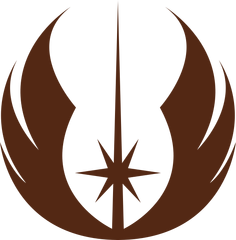 ​
The Jedi Order has stood as the Knights of the Old Republic for centuries. The Jedi Order stands as the largest force-based organization in the galaxy and is easily one of the most recognizable professions in the galaxy. The Jedi Order has peaked in its power since the defeat of the Sith in roughly 3900 BBY and has continued to surge in power underneath a variety of Grandmasters. The previous Jedi Grandmaster, an Arkanian named Kel Sedaya passed in 3802 BBY and the Jedi High Council lead by Master of the Order Sint Maiss (Female, Mon Cal) has taken up the mantle of acting as the Jedi Grandmaster while the Jedi High Council debates on who should take over the mantle of Grandmaster. Despite the largest breadth of the organization, it is not as eager to replace the late Grandmaster, seeing the interregnum as a chance to evaluate the values of the Order and take stock of its accomplishments. Despite the official proclamation by the Galactic Republic and the Senate that the Sith are eradicated from the galaxy, the Jedi Order remains skeptical and it might provide influence as to who is elected as Jedi Grandmaster.

The Jedi Order is lead ultimately by the Jedi High Council, comprised of 12 members. Five permanent members, four who served until they wished to step down and three short term members who would change regularly every few months to keep fresh faces and ideas coming into the High Council. Other leadership entities within the Jedi Order include the Council of First Knowledge which oversaw the training of Jedi and the Jedi Trials. The Council of Reconciliation which assisted the Republic Diplomatic Corps with undertaking exploration and bringing new worlds in the Galactic Republic. The last was the Council of Reassignment and those Jedi who failed the Jedi Trials were sent to the Council of Reassignment and took up a place in the Jedi Service Corps.

Overview of the Jedi Order ranks