Menu
Log in
Register
You are using an out of date browser. It may not display this or other websites correctly.
You should upgrade or use an alternative browser.

Staff How To: Character Creation

How To: Character Creation

Your first step in becoming part of a thriving role-play community is creating a character. Before posting in The Galaxy section, you need to have an approved character. We ask that all members use correct grammar in their profile and in the general role-play to help the community better understand you and what you are asking to achieve. 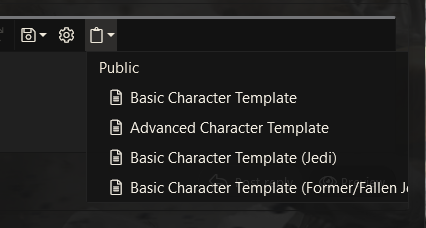 Writers can edit their character profiles at any time. While approved applications are checked by the Staff, it's your responsibility to keep track of the changes. After making changes, please post a list of the updated items as a new response to your original application.

Star Wars: Galaxy makes no restriction on the character limit that a writer may have. We only simply ask that you keep the number limited to what you feel you can write. We've all had those moments where we've created a character and had ideas and we simply have to put the character on the shelf because we don't want to write anymore. Writers may ask the Community Team to make a character inactive which simply means the character gets shelved for the time being, or the writer may just choose not to write it anymore.

Writers who wish to create background, support or "crew" or "team" members will note that these are considered to be "Companion" characters; sometimes called "NPCs" by some writers. Companion characters are meant to either serve as background characters, supporting a specific faction or plot, serving as crew, team members in a group, a ship, etc.

For further information regarding the Confederacy of Independent Systems please click faction name.

For further information regarding the Galactic Empire please click the faction name.

The following species are currently unplayable due to the detrimental impact they have had and/or may have upon the open and free creative writing environment of SW:G:

Please note that we have our "crash course" guide located HERE; please review it when you can. It provides a basic breakdown on Force Powers and how SW:G general views the Force and Lightsaber forms.

For those who are starting as a Jedi Knight (or to some extent a Jedi Padawan) please copy and paste this underneath where it says Force Powers:

Please note that players who have selected to play former Jedi, "rogue" Jedi or Jedi that fell to the Dark Side please copy and paste this underneath where it says Force Powers:

Independent force users, generally those outside of the Jedi Order and those not taken in underneath the Dark Acolytes of the Confederacy have less formal training unless they were a member of a specific Force order or possessed a "master". Generally users who are independent force users can pick and choose which force powers that they have access to but should generally retain the same as the Jedi Order or Former Jedi Order, please note that they are generally "weaker" in most areas and might excel in some due to lack of formalized training especially during this time period.
Last edited by a moderator: Mar 3, 2021